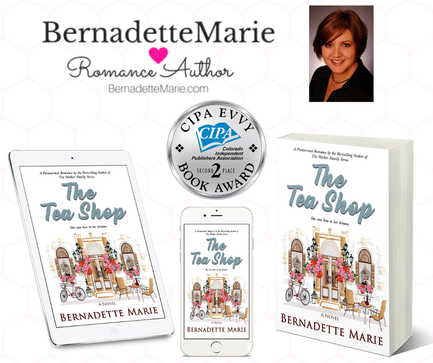 Seeing the future is a curse that Abigail Weston has carried her entire life. Knowing how and when someone will be hurt, or the whereabouts of missing people, haunts her enough to move away from the town that no longer trusts her.

When real estate developer Carson Stone meets the intuitive Abigail, he can't help but feel the connection to her and wonder if love at first sight is possible, especially since they share a passion for old buildings. She believes they all should remain, while he builds new ones in their place.

No matter Abigail's feelings for Carson, knowing that their future is to be together does not ensure them a happily ever after, especially if she can't figure out what the other side is trying to show her--because in her visions Carson's future is dark and cold.
Amazon
iTunes
Kobo
Google Play ​

A Special Excerpt from The Tea Shop

Things would come in dreams, and sometimes, they were just dreams. But when someone touched her, she would sometimes see things so vividly, as she had with Mrs. Winters. She’d been told once, by a psychic her mother had taken her to, that if the person who touched her was open minded, Abigail would see everything. Someone who was closed off to the world wouldn’t let her see.

From then on, she’d tried never to touch too many people.

Close friends and family knew that if Abigail warned you about something, you took heed, especially after their grandmother’s death.

She knew when relationships weren’t going to work out. Or even when a customer was going to walk in the door and cause her day to go badly. It wasn’t ideal, but she could deal with it.

The reason she’d moved to Golden and opened the small tea house with her cousin was to get out of the small town she’d grown up in. Her gift had become a nuisance and there were a few times she feared for her own safety.

Since she’d moved, she hadn’t had as many premonitions. That in itself was a gift as far as she was concerned. But once in a while, they still happened, just as they had today.

She didn’t want to know that the woman she’d served today was going to become ill after her birthday. Her time was limited. Mrs. Winters would succumb to Alzheimers, and she was already becoming forgetful. It broke her heart into a million pieces, because she’d found she very much enjoyed the woman. Perhaps the blessing would be if the woman never came back into the store, and neither did the man. But then that was a problem too. He was part of that premonition.

“So did you get some vibe on the old woman?” Clare asked as she turned to seal the container she’d made the egg salad in.

“Yeah. She’s going to become very ill this next year. She probably won’t make it though the spring.”

“That sucks,” Clare let out a deflated breath. “I’d be wigging out too if I knew that was going to happen to someone. Even if they’re old.”

Abigail nodded as she set the tea pot on the shelf. “There was already some sadness that loomed between them. They had a history.”

“Maybe. I guess I’ll find out.” Abigail sat on the stool that Clare used by the prep table.

Abigail felt her face flush with heat and her heart began to beat a rapid rhythm in her chest. She wiped her damp palms on her apron before she looked up to see Clare’s concerned face.
​
“Because that was the man I’m going to marry.”